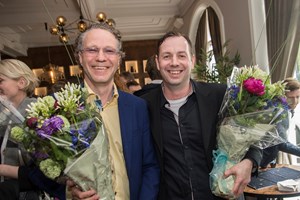 On June 2nd 2016, Nox Medical received its second award in one week. This time it was the prestigious Entrepreneur of the Year award from Vidskiptabladid, Iceland’s premium business newspaper.

“It is a true honor to receive this award from Vidskiptabladid. We see this as a testament to the hard work of our team and partners”, Petur Mar was quoted saying when he accepted the award from Helga Valfells, the CEO of NSA Ventures, one of Iceland’s key venture capital funds. “We are proud to receive this second award in one week and we hope to be able to inspire other entrepreneurs in Iceland to follow through with their ideas and dreams,” Petur said.

At the same time the company DataDrive received special recognition for being the New Company of the Year.

This website stores cookies on your computer. These cookies are used to collect information about how you interact with our website and allow us to remember you. We use this information in order to improve and customize your browsing experience and for analytics and metrics about our visitors both on this website and other media. To find out more about the cookies we use, see our Privacy Policy.